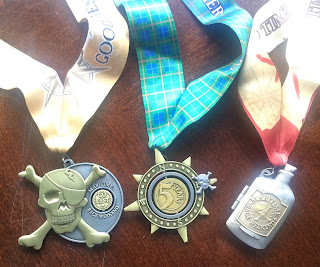 This past weekend I took part in the Maritime Race Weekend events in Eastern Passage, Nova Scotia. It is arguably one of the most popular events on the Atlantic Canadian running calendar, as the registration sells out each year.

I have friends who have run in the events for MRW in years past, and since I’ve taken up running it had been an event I wanted to participate in and be a part of but my first year running I didn't feel prepared and last year I was away. I have a friend who shared with me the advanced registration last September, so I signed up for 2016 as soon as it was available to do so. 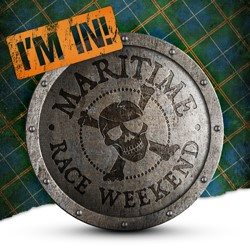 On the Friday of the Maritime Race Weekend, there is a Sunset 5km event where upon finishing, you are given a pretty sweet looking medal after finishing a course where you get to witness the sun setting on the Atlantic Ocean horizon.

On Saturday morning, there are 4 different distance events you can register for: the Sunrise 5k, the Coastal 10k, the Scenic Half-Marathon (21.1km) and the Classic Marathon (42.2km) where you’re given another medal for completing your distance. If you elect to run on both Friday & Saturday, you are awarded with a third medal as you completed what is called the “Tartan Twosome”.

Throughout the spring and early summer, I trained regularly. I ran, did ballet barre classes, practiced yoga. As the summer went on, there were camping trips and other adventures to occupy my time. My training took a back seat, though I was keeping active with lots of walking/hiking, biking, paddling. I was not concerned.

At the “festival grounds” area of MRW, they have set up a ship's bell, with a sign encouraging runners who’ve attained a personal best (PB in runner lingo), to ring the bell to announce their achievement. My plan was to have a nice easy run on Friday evening (the Sunset 5k) and then go flat-out on Saturday morning (the Sunrise 5k) and ring that bell! 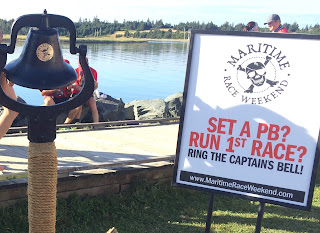 Fast forward to the Friday night of Maritime Race Weekend. I’d arranged to stay with a friend who lives just off the race route in the beautiful coastal community of Eastern Passage. They encourage everyone to dress as a pirate for any events they are running, and BOY were there some fantastic pirates on the race routes! I decided to wear my pirate getup for the Friday night race, and I ended up chatting to a number of people (and overhearing others) who liked my costume. The afternoon leading up to the race I felt reluctant to dress up, but I am SO glad I did; it added such a fun element of whimsy to the night!

The race start was PACKED tight, and in the starting chute you were shoulder to shoulder with lots of other runners and walkers but I was fortunate to connect with two friends who I know through running. The cannon (!!) went off and the runners crossed the start line. My body felt relaxed, my legs felt great, and there was just a hint of warm ocean breeze. At the 2.5km turnaround, my mom was there with noisemakers and bells to cheer on the runners (but most of all me, because I’m hers!) and it was so great to have her there.

Then, around the 3.5km mark… pain. Sharp pain on the lateral side of my left knee. Not an altogether new pain, as I’d felt the same thing last fall in another event I had done. My chiropractor had advised that I work on strengthening my hips, and back in the winter/spring I had been, but the summer held little useful cross training. So here I was, with sharp knee pain. I gritted my teeth and forged ahead, so much for a nice easy run. I crossed the finish line with a grimace but earned a pretty awesome medal. 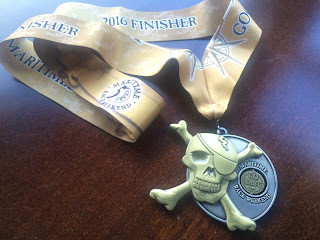 After some water and a banana from the aid stations, and chatting with some friends in the festival area, I walked back to my friend’s house… mildly limping and cursing my sore knee. Once changed and settled, I propped my feet up and rested while my friend and I got caught up and I got to snuggle her new kitten.

Saturday morning dawned bright and clear; it was an absolutely ideal day for a run. When I went to walk down the stairs at my friend’s house, the realization that my knee pain was still with me knocked most of the wind out of my sails. Still, I nibbled at my pre-race breakfast and got ready to roll. During the walk to the race-start, I was frowning with every step. That left knee was sore! But damn if the scenery of a calm ocean vista wasn’t just so incredibly beautiful.

As I approached the starting area my positivity was low, but then I heard my name being called... and spotted one of my best friends and her puppy! They had come down with her dad to cheer on her stepmom, who was running the 10k event (she absolutely rocked it, and got a PB!). Having my friend's love and hugs before my run was a huge bolster of energy.

I spotted my pace bunny (a friend of mine) in the crowd in the starting area, but after I got myself where I’d seen him, he had moved. At that point, there were so many people crammed together that I wasn’t keen on trying to re-locate him so I crossed my fingers for a good run and trust I’d find him later. When the cannon went off, the crowd surged and there were friends, family and volunteers lining starting area, cheering on all who passed. It was wonderful!

When we were a couple hundred feet outside the start line, I had the first sharp pain in my knee. I hobbled along for a few awkward running steps, then I had to walk. The pain was so intense and so bright that I knew there was no way to ignore it. The following moments in my brain were rapid-fire snippets of self-doubt, sadness and grief in an angry cycle:
- how on earth can I continue to run?
- maybe I can walk it, there’s no shame in walking
- let’s try running again, maybe it was a fluke
- nope, that hurts a f@%ing lot
- well, there goes your personal best (cue tears in my eyes)
- you need to get through this!
- holy crap, can you do 5 kilometers of this?

The pain was enough to take my breath away. If anyone happened to look over at me, they’d see my face contorted with anguish and lots of nostril flaring and lip puckering. But I kept going.

Somewhere around the 1km mark, something happened. I stopped minding the pain. It didn’t go away (there’s no way I’m that lucky) but I stopped noticing it so much. At the 2.5km turnaround my mom was there again. At this point I knew my time was not going to be something I would be feeling pride about, so I slowed up and dashed over to her for a tearful hug (“running injured was not part of the plan” I sobbed to her) but she kissed my cheek and cheered me as I ran away.

For the rest of the run I tested my body to see how much pain it would allow me to endure. I could run, but all attempts at extending my stride were met with a sharp pain/wave of nausea. I wasn’t going to get my PB, but I’d be damned if I wasn’t going to give this run everything I could.

Once I turned the last corner and had the finish line in my sights, it was like a switch flicked on in my brain and I flat-out sprinted for the finish line. I didn’t feel anything but euphoria… I made it! As soon as I crossed, I spotted my friend from before the race and her dad at the fence and went to collect some hugs before I picked up my medals (!!).

The rest of the morning was spent enjoying the post-race refreshments (thank you to whomever decided to get the mandarins!) and chatting with friends – some whom I’ve known for years, others whom I’ve met as a result of running – and cheering on other runners. If you’ve never stayed behind after your event was over to cheer on other runners, you’re missing out. It is a wonderful glimpse into being a runner… there is joy, there is desperation, every conceivable age, ability and body type you can imagine. All with the same singular goal: cross that finish line.

Then on Sunday, I was consumed by an unyielding feeling of despair that I can’t quite pinpoint. The post-race blues combined with my own self-loathing over my performance combined with a few other petty things that were mildly upsetting bubbled over and I found myself laying on the couch with my dog, having a crying fit. I texted my sister (a fellow runner on the other side of the country) for comfort and advice and made a Facebook post that – in hindsight – was a beacon for reassurance that all really was well.

I was reminded that setbacks are part of progress and that I truly am fortunate to have a network of friends, some who run & could offer suggestions, others who helped me smile and see the bright side of things. I had a massage appointment tonight (hurt, but helped!), a physiotherapy appointment tomorrow, and a chiropractor appointment booked for the day after. I am looking after myself and resting too.

I also have a pretty awesome take-away from the weekend that I’m choosing to focus on… I have completed a number of running events over the last few years, but this weekend I experienced my first real sense of community with being a runner. I’m a fairly friendly and chatty gal, both pre and post race (sometimes during if I encounter a fellow chatty runner) but it’s been mostly fleeting. I don’t belong to any running groups, and while I usually see familiar faces, I have very few running friendships (if you’ve read this far, and you’re one of those friends, you know who you are!). After Friday’s event, I had a fellow runner who I met at an event in July stop me to chat because she recognized me and we discussed running, injuries, and the weekend festivities. On Saturday I got to cheer on and share victory embraces with many people; some of whom I count among my friends, and others who I don’t know well, but I recently met and was grateful for them.

I look forward to future events where I get to meet new friends, embrace old ones and form bonds over both disappointments and triumphs.